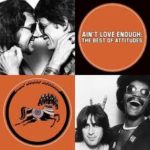 The quartet released two album, Attitudes and Good News, between 1975 and 1977 for the late, great George Harrison’s (1943-2001) record label, Dark Horse. This new release finally presents in digital form all but three tracks from those two albums including past “songs of the week” like “Being Here With You,” “Change” and “Ain’t Love Enough” all still available in our archives. This time around we focus on a pop/rock mid-tempo entitled, “In A Stranger’s Arms.” Originally included on Attitudes’ sophomore album, Good News, this song featured Mr. Kortchmar, who composed it, on lead vocals and guitar.  There is a very sophisticated instrumental craft on this number with its delicious latin vibe and irresistible refrain not far from the soulful rock of The Doobie Brothers or Little Feat. The great musicality of “In A Stranger’s Arms” attracted saxophone legend, David Sanborn, who covered it on his 1977 album, Promise Me The Moon.  The title-track of that album was another Kortchmar composition also included in Good News. “In A Stranger’s Arms” was eventually covered also by pop songbird, Yvonne Elliman in 1978, and by Australian singer, Jon Stevens in 1980.