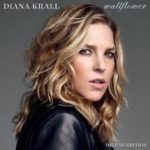 This evergreen was happily resurrected by Diana Krall and David Foster for the uber-talented jazz singer/pianist’s 2015 Wallflower cd. Ms. Krall was confronted by a handful of pop classics that were skillfully modernized by Foster in an elegant, ultra-sophisticated traditional pop atmosphere. “I Can’t Tell You Why” was reinvented by The Hitman with a flowing, orchestral setting underscored by an irresistible, Brazilian-tinged beat. On top of an amazing instrumental performance by Ramon Stagnaro on acoustic guitar, Christian McBride on acoustic bass and Karriem Riggins on drums, there’s Ms. Krall’s trademark piano playing with her smoky, seductive lead vocal breathing new life into this timeless melody. A smart touch to the track were the familiar backing vocals courtesy of the songs’ co-writer and original vocalist, Timothy B. Schmit. Foster’s pristine production and the amazing work of his team of engineers brought Wallflower a well-deserved Grammy nod as Best Engineered Album, Non Classical. Ms. Krall’s version of “I Can’t Tell You Why” was released as a single and reached the top ten on the Smooth Jazz chart.

Look at us baby, up all night
Tearing our love apart
Aren’t we the same two people who live
Through years in the dark?
Ah
Every time I try to walk away
Something makes me turn around and stay
And I can’t tell you why