From I DON’T WANT YOU ANYMORE (single)

In 1980, renown soul/R&B act, the Tavares, released an album titled Supercharged. The five brothers (Ralph Edward Vierra Tavares, Pooch – Arthur Paul Tavares, Chubby – Antone Lee Tavares, Butch – Feliciano Vierra Tavares, Jr. and Tiny – Perry Lee Tavares) from Providence , Rhode Island were responsible for previous hits including “Heaven Must Be Missing An Angel” and “It Only Takes A Minute.” Tavares worked on Supercharged with David Foster who produced a couple of tracks. The emergent Canadian music-maker reworked a pair of songs with Tavares, “We Both Tried” and “I Don’t Want You Anymore.”

Foster originally co-wrote and crafted the songs with Bill Champlin for the legendary vocalist’s 1978 album, Single. “We Both Tried” was a tender ballad beautifully performed by Tavares. “I Don’t Want You Anymore” was a funky/rock jam with jazzy chord changes that showcased Foster’s quality pop work of those days. “I Don’t Want You Anymore” has been reviewed and was a single released from Supercharged. The b-side of the single was another Foster co-written composition entitled “Why Can’t We Fall In Love.”

Originally included on Deniece Williams’ beautiful 1979 album, When Love Comes Calling, “Why Can’t We Fall In Love” was co-written with Carole Bayer Sager and Williams and produced for Tavares by up ’n’ coming producer/arranger Benjamin Wright, Jr. Foster’s original arrangement for Williams was smooth, elegant and influenced by Earth, Wind & Fire’s classy, jazz-influenced sounds. Wright took the song in another direction by giving it a breezy feel with a mid-tempo beat thus bringing the song into classic Philadelphia soul territory. Butch Tavares’ vocal performance was a knock-out with his tenor often going into falsetto and the groups’ trademark vocal harmonies were equally noteworthy. The backing track was played by top-notch aces including Harvey Mason on drums, James Jamerson, Jr. on bass, John Barnes on keyboards and the late David Williams on guitar. Wright also provided some lush strings and horns to enhance the level of sophistication on the track. Although partial to Williams’ original take for her pyrotechnics vocals and Foster’s amazing work, Tavares did an exceptional job on “Why Can’t We Fall In Love” and they deserve high praise for the ear-candy result.

The entire Supercharged album has aged well and is worth a listen. For those who want to listen to Williams’ take, just click here. 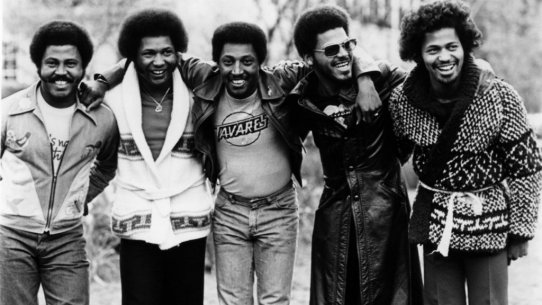