Although these acts were known for their rock music, Foster carefully crafted tunes for them that exhibit a refined atmosphere with an ear candy flavor that was tailor-made for mainstream radio playing. Foster brought this same concept to Fee Waybill’s Read My Lips. After The Tubes’ incomprehensible refusal to work again with the Hitman after their successful one-two punch of The Completion Backward Principle and Outside Inside, the band’s front man would go on to team up with the Canadian music maker on Waybill’s 1984 debut album. Foster’s and Waybill’s original idea was to join forces to create an album that would deliver more hits like “Talk To Ya Later” and “She’s A Beauty.” With this purpose in mind, they collaborated extensively on Read My Lips with the axe-man of Toto, uber-talented Steve Lukather, who co-wrote rockers with them and graced the music with his powerful guitar. The result would have been huge with catchy rock anthems like “Saved My Life,” “You’re Still Laughing” or the golden ballad “I Don’t Even Know Your Name (Passion Play).” Unfortunately, Capitol Records boycotted Read My Lips. Capitol’s non-existent promotion showed that they were probably afraid that the eventual success of Read My Lips would have brought The Tubes to an end. Foster proves again that he is an absolute master when it comes to enhancing the level of a composition with his art of arranging. He brought to life some pop/rock gems including “Caribbean Sunsets” and “Who Loves You Baby”  from Read My Lips that have been reviewed in the past.

This week, the spotlight is on the catchy number “Nobody’s Perfect.” This mid-tempo rocker is an A-team affair composed by Waybill and Foster with virtuoso guitarist Michael Landau, legendary drummer John Robinson and famed engineer Humberto Gatica. “Nobody’s Perfect” presents a catchy melody with a sing-along, guitar-driven refrain that leads to a wall of keyboards in the high-tech bridge that is 100% Foster. Waybill shows his chops with a splendid lead performance while Landau’s burning guitar, Robinson’s energetic drumming and Foster’s keyboards and synths reiterate they are key elements that make this recording sing. Read My Lips is an extremely interesting listen for those who only know Foster for his aforementioned pop/adult contemporary hit ballads or his platinum work with Michael Bublè, Josh Groban or Andrea Bocelli. It shows the all-around talent of the Canadian super-producer who, during the course of his long career, has graced almost every style of music with his strong personality and extraordinary results. 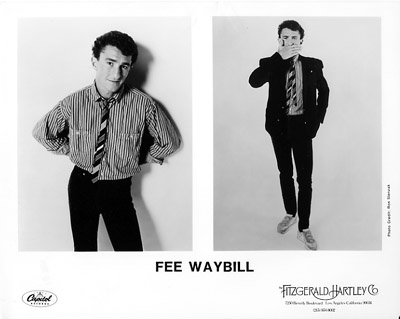