from FLY AWAY (single)

The late R&B/adult contemporary singer Stevie Woods enjoyed a brief stint of chart action in the early eighties after the release of his noteworthy debut album, “Take Me To Your Heaven.” The album was released in 1981 under the production of Jack White of Laura Branigan fame. “Take Me To Your Heaven” was a delicious collection of black-pop that showcased the warm timbre and excellent phrasing of the singer who was stylistically influenced by the incomparable Johnny Mathis.

Musically, the album followed in the footsteps of quality pop/R&B legends like Al Jarreau, Lionel Richie and Christopher Cross. With those influences in mind, White and Woods picked a string of catchy R&B/pop/adult contemporary compositions and put them in the hands of gifted arrangers Greg Mathieson, Gene Page and Jerry Hey. An impressive list of session aces including Nathan East, Mike Baird, Ed Greene, Steve Lukather, Ray Parker, Jr. and Paulinho Da Costa ensured a top-notch level on the instrumental tracks.

The debut single from “Take Me To Your Heaven” was “Steal The Night,” a catchy ballad that reached #25 on Billboard’s Hot 100, #36 on the R&B chart and #14 on the Adult Contemporary chart. The follow-up single was a refined, mid-tempo tune entitled “Just Can’t Win Them All.” This song was musically crafted in the best west coast vein and rightfully became another multi-format hit. The final single off the album was a beautiful cover of a classic Peter Allen/David Foster/Carole Bayer Sager composition “Fly Away.” Originally included on Allen’s 1980 “Bi-Coastal” record, “Fly Away” was an elegant ballad that quickly became one of Allen’s signature songs. Woods’ faithful rendition was based on a rich, sophisticated arrangement written by Mathieson with the embellishment of lush strings and horns courtesy of Jerry Hey. Those gentlemen provided the singer with the perfect back-up to deliver a superior vocal performance. The result was pure ear-candy and gave Woods another minor hit in 1982 by reaching #82 on Billboard’s Hot 100 and #23 on Adult Contemporary. “Take Me To Your Heaven” also included a gorgeous rendition of “Throw A Little Bit Of Love My Way,” a Foster/Graydon ballad that alone was worth the price of admission. “Take Me To Your Heaven” was one of those little-known, black-pop gems that’s a true delight to listen to from start to finish. If you like quality music, great songs, refined arrangements and top vocal and instrumental performances, give “Take Me To Your Heaven” a listen. 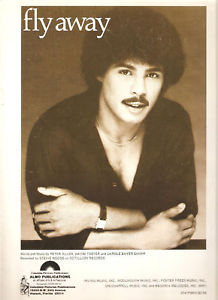 You’re an anchor, I’m a kite
You’re what gets me through the night
You keep me steady and on course
Until I found you, I was lost

But you’re the up, I’m the sky
And sometimes if I go too high
Then the pull the string
That pulls me back
If not for you, I might lose track

I might fly away
Take to the sky someday
But not for now, not today
Nobody here is flying away

You have reasons, I have dreams
So we’re perfect, so it seems
You tell fortunes, I tell the truth
Kept me from my crazy youth

When you’re near me, I feel whole
I don’t have to rock and roll
I don’t worry, I don’t think
But, baby, hold me
Cause I might break

I might fly away
Take to the sky someday
But not for now, not today
Nobody here is flying
Flying away