In 1972, the Canadian pop/rock group Skylark introduced David Foster’s talents to the world. After the massive success of their 1973 hit “Wildflower,” Skylark went back into the studio to work on their sophomore release. Produced again by Eirik Wangberg, the new recording saw the group down to only three members – Foster, his then-wife Bonnie Jean (B.J.) Cook and singer Donny Gerrard. “Skylark 2” was released in 1974 and oddly enough, the new album again included their “Wildflower” hit ballad, maybe to cash in some more on its huge potential. “Skylark 2” was a good soft/rock collection with touches of soul, country and Latin rock.

It incorporated interesting material like the Brenda Russell song “You Remind Me Of A Friend” which later became a hit for Rufus & Chaka Khan under the title “Please Pardon Me (You Remind Me Of A Friend).” That song showcased the vocal talents of Cook and Gerrard, but it also showed Foster’s blooming talent as an instrumentalist and arranger. Other good moments of the album are the rocking mid-tempo “It’s A Wonder” and Foster’s instrumental tour-de-force “Foster Frees.” This song was eventually reworked with Foster’s second band Attitudes on their second album “Good News.” Co-written by Roger Nichols and John Bettis, “Love’s River Flowing” was a love song that follows in the footsteps of “Wildflower” and anticipates what Foster will become famous for – crafting romantic music. “Skylark 2” brought another minor hit on the charts, the mellow r&b tune, “If That’s The Way You Want It” that reached #55 on the 1974 R&B charts.

Co-written by hit-makers Dennis Lambert & Brian Potter, it’s another highlight of the album that showcases smooth vocals and refined, Latin-tinged instrumental back-up that echoes Santana. “If That’s The Way You Wanted” was also covered by several r&b acts including Tavares, Hot and Chuck Jackson. After “Skylark 2,” the group disbanded and Gerrard would go on to a good singing career. Foster became an in-demand session player and was eventually one of the most successful music-makers in history. While still married to Foster, B.J. Cook co-wrote material with legends like Michael McDonald, Bill Champlin and Jay Graydon. One of her best compositions was “Let Me Go, Love,” a ballad she co-wrote with McDonald for Nicolette Larson. “Let Me Go, Love” became a Top 40 hit and was in the top ten on the Adult Contemporary chart. 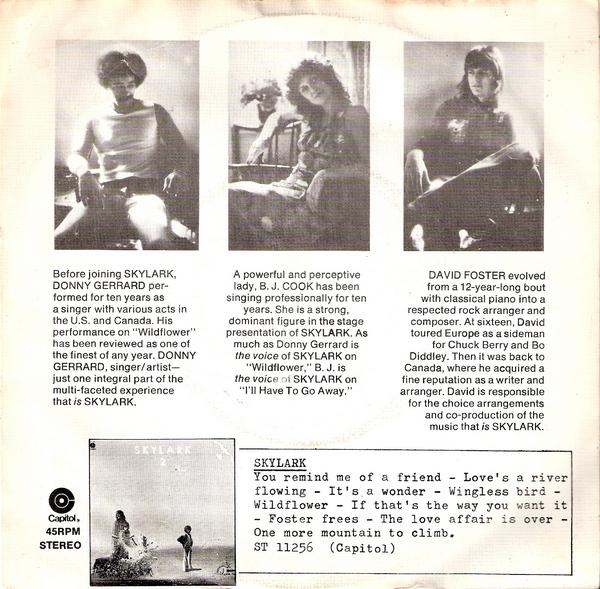