from YOUR PLACE OR MINE

Originally from California, The Hues Corporation was a pop/R&B trio formed in the late sixties under the wing of manager/music-maker Wally Holmes. In 1974, The Hues Corporation rose to fame thanks to their mega-hit, “Rock The Boat.” Written by Holmes and sung by group member Fleming Williams, “Rock The Boat” sold well over two million copies and kept the #1 position for weeks on both sides of the Atlantic. “Rock The Boat” also has the distinction of being one of the first disco songs to reach the top of the charts worldwide.

The Hues Corporation followed that milestone song with other minor hit singles like “Rockin’ Soul” and “Love Corporation,” but they never captured that same phenomenal success again. They kept recording and released three more records in the seventies before disbanding around the end of the decade.

The 1978 final album, “Your Place Or Mine,” was again completely written and produced by Holmes. It presented The Hues Corporation’s usual mix of disco tunes and smooth ballads well delivered by the vocal trio and backed up by session aces including Lee Ritenour, the late Carlos Vega, Mike Porcaro, Jay Graydon and David Foster. D’Arneill Pershing, who worked with superstars Johnny Mathis and The 5th Dimension, arranged the album while Foster shared the keyboard credits with monster player Greg Mathieson. Although the level of the included material wasn’t memorable, the album was enhanced by the trio’s flawless vocal harmonies and the superior musicianship backing the record up. The disco songs on “Your Place Or Mine” are quite forgettable, but the soul/pop ballad, “With All My Love And Affection,” is worth the price of admission. Williams’ tender performance was perfectly backed up by the rhythm section and the soothing strings and horns sweeten the atmosphere. Another good moment on the album is the mid-tempo “Love Fire” that sports a catchy refrain and gets great instrumental accompaniment by the usual suspects. 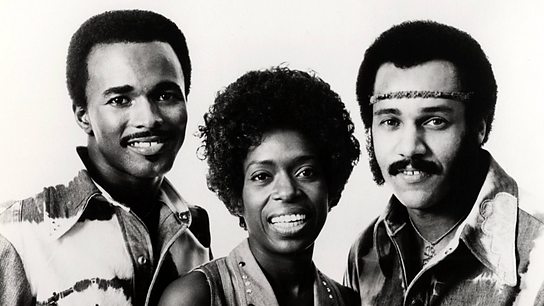