from LOOKING THROUGH YOUR  EYES/COMMITMENT (single)

Leann Rimes is a famous American country/pop singer. Since her debut in 1996 with the multi-platinum album “Blue,” Rimes has collected an impressive number of hit singles and awards. Among her most loved songs are “How Do I Live,” “I Need You,” “One Way Ticket (Because I Can)” and “Big Deal.”

In 1998, the young singer was at the top of her game. She was enlisted in the star-studded soundtrack of the animated movie “The Quest For Camelot.” That musical project was the brainchild of David Foster and legendary lyricist Carole Bayer Sager. The soundtrack consisted of adult contemporary songs perfectly crafted by Foster and his team. “The Quest For Camelot” included the original version of “The Prayer,” the Academy Awards’ nominated gem sung by Celine Dion and Andrea Bocelli. Another impressive song was “Looking Through Your Eyes.” Sung by Rimes, it became the lead single off the album. This ballad, a sweet composition beautifully sung by the artist, was another big hit reaching #18 on Billboard’s Hot 100, #4 on the Adult Contemporary chart and #38 on the UK Top Forty. It was paired with “Commitment,” a top five Country hit. The success of both songs gave the single a gold certification for sales in the US. Eventually, “Looking Through Your Eyes” was included in Rimes’ platinum album “Sitting On Top Of The World.” 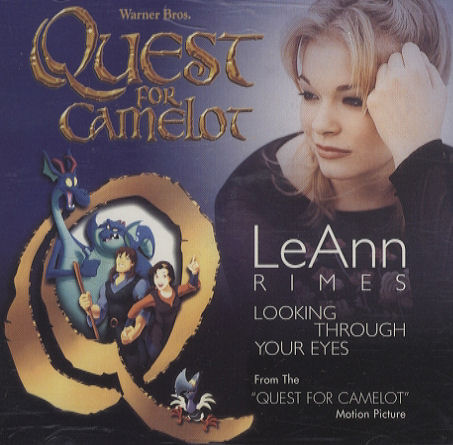 Look at the sky
Tell me what do you see
Just close your eyes
And describe it to me
The heavens are sparkling
With starlight tonight
That’s what I see
Through your eyes
I see the heavens
Each time that you smile
I hear your heartbeat
Just go on for miles
And suddenly I know
My life is worth while
That’s what I see
Through your eyes
[Chorus:]
Here in the night
I see the sun
Here in the dark
Our two hearts are one
It’s out of our hands
We can’t stop what we have begun
And love just took me by surprise
Looking through your eyes
I look at myself
And instead I see us
Whoever I am now
It feels like enough
And I see a girl
Who is learning to trust
That’s who I see through your eyes
[Chorus]
And there are some things we don’t know
Sometimes a heart just needs to go
And there is so much I’ll remember
Underneath the open sky with you forever
[Chorus]