from THE MONKEY TIME/SPORTS FANS (single)

The two albums that David Foster did with The Tubes in the early eighties are some of the most challenging works he ever did. Foster applied his smooth, polished pop style to the raw, rock sounds of the San Francisco band and the results were perfectly on target with a well balanced and clever pop/rock that showcased The Tubes’ high potential with important chart results.

“She’s A Beauty” from “Outside Inside” became a top hit and lead the way for the second single off the album, a danceable cover of Major Lance’s “The Monkey Time.” In the capable hands of David Foster, this classic song written by the late Curtis Mayfield becomes a modern jam with an infectious groove, smoking horns and fantastic vocals by Fee Waybill and special guest Martha Davis of The Motels. A little known fact is that Davis refused to allow the use of her vocals for the single release afraid that it’d interfere with The Motels’ new songs so Foster and The Tubes recorded a slightly different track with another singer, Michele Gray who can be heard on the single. Gray was one of the dancers on The Tubes’ shows and eventually married the legendary Todd Rundgren. “The Monkey Time” was a minor hit on Billboard’s Hot 100 reaching #68 but was a very good hit on the Mainstream Rock charts at #16. The b-side was “Sports Fans” a rock track that was left out from their previous album “The Completion Backward Principle.”
This coming summer will witness the release by Iconoclassic Records of an expanded edition of “Outside Inside” with several bonus tracks, b-sides and rare tracks. It’ll also finally present both versions of “The Monkey Time.” 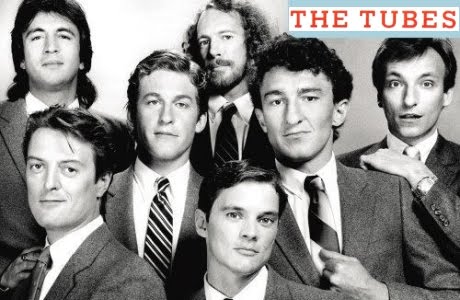 Now there’s a place right across town, whenever you’re ready
Where the people gather ’round, whenever they’re ready
And then the music begins to play
You feel a groove comin’ on its way

Are you ready? Yes I’m ready.
You get yours, I got mine
For the monkey time, monkey time

Now this dance that the people do, don’t know how it started
All I know is when the beat brings the feel
it’s hard to get parted
And then the music begins to play
And automatically you’re on your way

Say Fee, are you ready tonight?
I’m ready baby. But you’re ready for what, Fee?
I’m ready to do the monkey. But are you ready for my monkey?
I’m ready, and my monkey’s ready.
Your monkey?! Oooo, you’d better put that baby on a chain!
Say baby, my monkey know what he talkin’ about.
Now stop it Fee!