The ultra-talented Tommy Bolin, before his untimely death in 1976, was one of the world’s most loved guitar players. His unique style can be heard on albums by jazz great, Billy Cobham, rock groups, The James Gang and Zephyr and hard rock masters, Deep Purple.

In 1975, Bolin, released his first solo album entitled, “Teaser.” It’s a fantastic record that showcases the guitarist’s immense talent and versatility. Rock, jazz, country, latin and reggae influences are all present on the album’s nine tracks with Bolin’s guitar and voice always in the spotlight. “Teaser” was produced by Bolin with Lee Kiefer who, around the same time, was working with pop/rock group, Attitudes. That’s probably why Attitudes’ members, David Foster and Paul Stallworth both appeared on “Teaser.” Foster played on three songs along with Jeff Porcaro on drums and Stanley Sheldon on bass. The opener, “The Grind” is a swinging funk/rock number with tight playing and amazing soloing by Bolin. The second track with Foster on piano and synths is an instrumental entitled “Homeward Strut.” Again there’s a funky overtone on this rock jam with spectacular playing by the leader and the backing band with Porcaro’s drumming leading the dance. Foster’s piano opens the intense rock ballad, “Dreamer.” On this song Bolin doesn’t just play his amazing guitar but also sings beautifully the lyrics written by his friend Jeff Cook. Former Deep Purple singer, Glenn Hughes sang the last verse of “Dreamer” but wasn’t credited for contractual reasons. Another gem on the album is “Savannah Woman” that with its delicious latin vibe shows another side of Bolin’s music.
“Teaser” is a must have to discover the superior talent of this singer/guitar player, especially his gift to mix perfectly different music genres and styles always with great results. 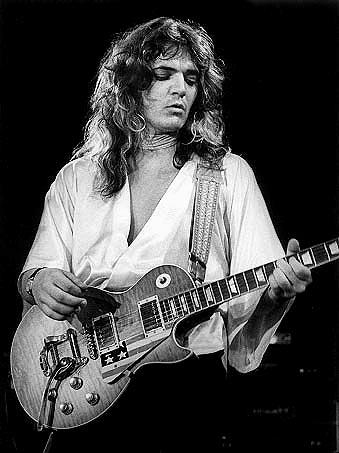 Halfway gone, and halfway back,
You’re always dreaming’ ’bout what you lack.
You’re takin’ your time from your busy day,
To sit by the track and watch the train roll away.

Dreamer I know what you’re thinkin’,
I can see it in your face.
Maybe before you were happy,
But now your thoughts aren’t of this place.

You’ve begun to change now baby, I don’t see.
Oh but I know you well and it’s clear to me.
You think chains hold you here now baby, but they don’t exist.
You don’t have to stay mama, I won’t insist.

So take the train today, and don’t look back again.
Live the dreams you have, don’t dwell on what has been.
Your future’s brighter now, there’s brighter days ahead.
Any sad farewell words, better left unsaid.

Maybe before you were happy, but now your thoughts aren’t of this place.
I only wish you were with me, someone like you can’t be replaced.