On the course of his spectacular career, David Foster always had a special knack for writing effective and catchy instrumental tunes. We all remember his 1985 hit, “Love Theme From St. Elmo’s Fire,” or “Winter Games,” the theme of the 1988 Calgary Winter Olympics. Another instrumental masterpiece, “Night Music,” was included on the soundtrack of the John Travolta/Olivia Newton-John movie “Two Of A Kind.”

“Night Music” was originally part of Foster’s 1983 debut solo CD, “The Best Of Me.” This beautiful, piano-led ballad was also released as a single in Japan and Canada backed up by “Heartstrings,” another intense instrumental tune from “The Best Of Me” co-written with the legendary Burt Bacharach. Foster’s immense songwriting talent is on the spotlight here again with this melodic gem. “Night Music” is one of the most emotional pieces ever written by the Canadian music maker. It sports a gorgeous melody with a strong nostalgic feel dominated by Foster’s tender piano playing. The nocturnal feel of the tune is enhanced by the use of various keyboards and effective synthesizer strings and horns. In 2008, “Night Music” was included, along with other Foster goodies, on a compilation entitled “The Very Best Of David Foster.” 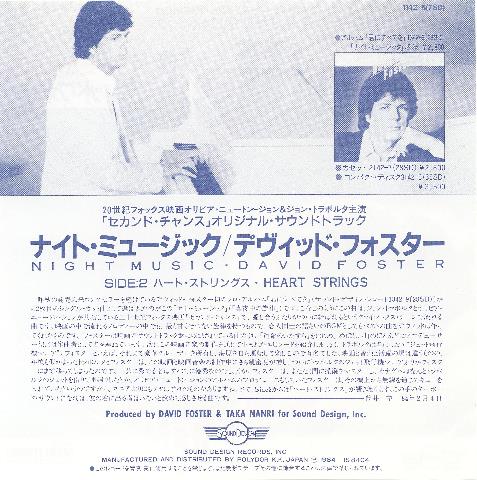