“25 Or 6 To 4” is one of Chicago’s trademark songs. It was originally released in 1970 on the super-group’s second album and was written by the band’s keyboard player, Robert Lam. “25 Or 6 To 4” is an amazing rock anthem that perfectly showcases Chicago’s blend of rock and jazz thanks to Terry Kath’s amazing guitar, Peter Cetera’s powerful tenor and Chicago’s trademark in-your-face horns.

Fifteen years later, Chicago was hotter than ever thanks to the multi-platinum triumph of “Chicago 17,” but suffered Cetera’s departure to go solo. Thanks to monster hits like “If You Leave Me Now,” “Hard To Say I’m Sorry” and “You’re The Inspiration,” Cetera’s tenor had become recognizable as the band’s voice for worldwide audiences. Cetera’s was also the band’s main songwriting force through his partnership with producer David Foster. The loss of his talent to the band was extremely tough. When Chicago went into the studio with Foster to work on “Chicago 18,” they had Jason Scheff, a young tenor who sounded fairly enough like Cetera, but brought his own style to the group. Then Chicago had a brainstorm – remake their own hit “25 Or 6 To 4” to reaffirm Chicago’s identity and roots.

This new, high tech version became the first single off “Chicago 18” and reached #48 on Billboard’s Hot 100. The band also cut a video for the song that got quite some airplay on MTV. The song was slowed down compared to the original, with heavy synthesizer and drum programming supporting the band’s powerful horn playing and Michael Landau’s strong guitar. Scheff’s vocals and the group’s harmonies were flawless while Foster’s arrangement resembled some of Phil Collins’ work of those years. The production was perfect and “25 Or 6 To 4,” in this new, updated version, rocks again. 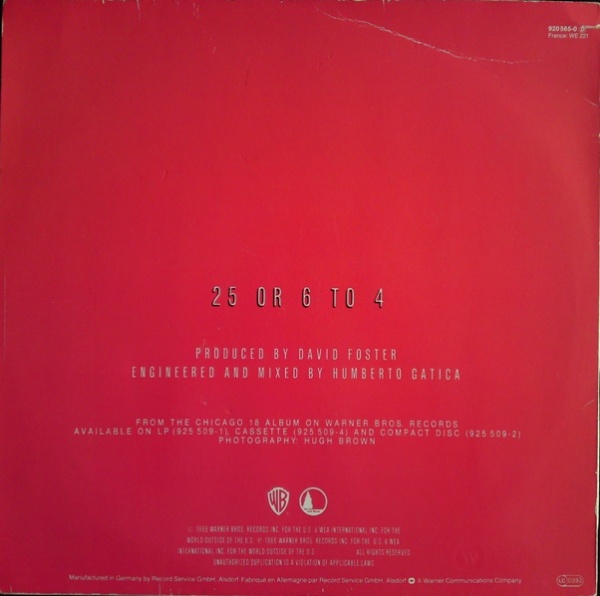