from A HOLE IN THE WALL

In the early eighties, Marc Jordan’s “A Hole In The Wall” was one of those really fine albums that were criminally ignored at the time of its release. Given Jordan ’s superior talent as songwriter and the craft of the songs included here, this musical work of art clearly deserved better promotion, but it was unfortunately released only for the Japanese market by a little label known as Sound Design.

Co-written with David Foster, the beautiful ballad “It’s Only Love” could have made it to the top of the charts because it had the same quality as other hit ballads of the era by singers/songwriters like Kenny Loggins, Stephen Bishop or Christopher Cross.

If you discover “A Hole In The Wall,” you’ll find forty minutes of fantastic pop music. From the rocking opener “Slipping Away,” co-written with Steve Kipner and dominated by Steve Lukather’s guitar, to the magnificent mid-tempo “Margarita,” where Jordan ’s confidential voice is joined by the great Ernie Watts on sax and the unmistakable backing vocals of Richard Page and Steve George, this record oozes class and style. Another highlight is the powerful title track, again co-written with Foster who leads the show with his fender rhodes together with rousing guitars. Jordan’s vocal performances are always good with his personal timbre caressing delicate moments like “Thieves” and “Dance With Me,” but getting quite powerful on another elegant rocker, “Hold On,” co-written with Jay Graydon who flies high with his guitar playing. Marc Jordan proves he is a true rare talent. Through the years he has scored hits for people like Rod Stewart, Josh Groban, Cher , Natalie Cole and Bonnie Raitt, but you gotta listen to his own records to fully appreciate his unique and personal music that it isn’t pop, isn’t jazz, but sums up the best of both worlds. 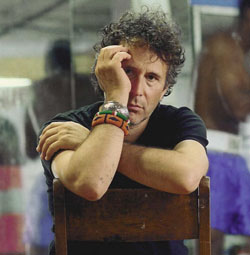 I watched you say goodbye