Bruce Roberts is one of the most successful pop songwriters of the westcoast music scene. His songs were recorded by a who’s who of music stars like Barbra Streisand, Cher, Dolly Parton, Dionne Warwick, Roberta Flack, Celine Dion and Donna Summer.
His songbook includes hits like “No More Tears (Enough Is Enough),” “Stronger Than Before,” “You’re Moving Out Today,” “Making Love” and “The Lucky One.” Roberts also kept going a parallel career as recording artist releasing a few well conceived solo abums. Those records obviously presented the author’s take on several of his important songs plus gems that he kept for himself. In 1980, two years after his self titled debut, Roberts prepared his sophomore record entitled “Cool Fool.” Vocally, the performances aren’t up to the standards of his famous clients, but Roberts’ delivery is intense and sincere while the music background is always top notch. The singer/songwriter usually enlisted the best players and arrangers on the scene like David Foster who appeared on all Roberts’ solo albums. The two went on to co-write songs together and Foster will produce music for Roberts’ “Intimacy” album. On “Cool Fool” Foster played keyboards on the refined disco number entitled “S’ Good Enuf.” That’s a fantastic party song with incredible vocal harmonies courtesy of Luther Vandross, David Lasley and Arnold McCuller plus mean strings and horns arranged by Gene Page and Jerry Hey. This song was released as a single but missed the charts though it’d have be a giant hit if covered by a more household name. “S’ Good Enuf” is clear evidence of how a well written song could do wonders with a disco sound in the hands of top music makers and it still sounds fresh today. “Cool Fool” also presented several of Roberts’ trademark ballads like “No Other Love,” “All Through The Night” and “With All My Love, With All My Heart.” Among the up-tempo songs on the record we’d like to mention the elegant title track, again with smooth vocals and tight horns. 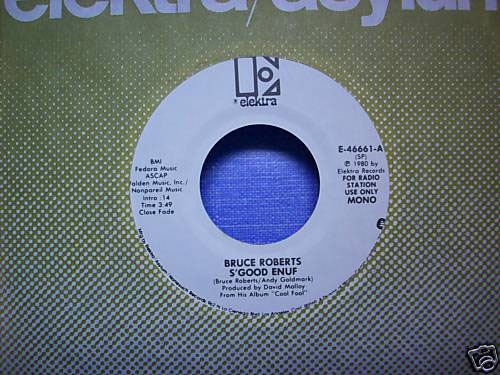