From BACK WITH A HEART
Written by Peter Allen & Jeff Barry

Back in 1974, “I Honestly Love you” was a worldwide hit for pop sensation Olivia Newton John. This soft ballad was another gem co-written by the late Peter Allen with Jeff Barry. Newton John’s version became a true evergreen. “I Honestly Love You” was a multi-genre hit reaching #1 on the Pop and Adult Contemporary charts.

It crossed over and became a top ten Country hit, won a couple of Grammys and propelled the talented singer’s career to new heights in North America.

In 1998, Newton John recorded a comeback album in Nashville with the cream of country producers like Chris Farren, Tony Brown and Gary Burr. The album, “Back With A Heart,” presented a well-dosed collection of adult contemporary and contemporary country songs mostly co-written by the singer. The new collection also included a remake of “I Honestly Love You,” arranged and produced by David Foster. The new version kept the emotional strength of the original, but added a modern pop twist with a keyboard driven arrangement and state of the art production. The singer’s expressive voice caresses the tune with sweet harmony vocals provided by the talented Babyface. The 1998 version was the first entry on Billboard’s Hot 100 for Newton John in six years, reaching #67. The track also broke the Top Twenty Adult Contemporary chart while a country remix reached #16 on the Country Music Sales chart. Its parent album, “Back With A Heart,” became a top ten hit on the Country Albums chart as well. 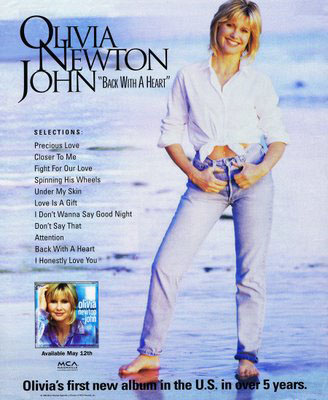