In 1976, David Foster produced Jaye P. Morgan’s self-titled album. It was a musical treat that offered fans the first important signs of Foster’s quality pop that would fully bloom on milestone albums like “Airplay.” Unfortunately, and in spite of its superior artistic value, “Jaye P. Morgan” never got the distribution it deserved thus becoming a well-kept secret. Thankfully, many of the songs included on the album resurfaced a couple of years later on new releases by R&B acts Hodges, James & Smith and Jaisun Johnson. The same Foster produced and arranged backing tracks were used with new lead vocals. Strangely enough, on both albums Foster is only credited as arranger while he’s obviously the producer of the instrumental tracks and the backing vocals salvaged from the original Jaye P. Morgan record. Hodges, James & Smith’s album was entitled “What Have You Done For Love” and included three cuts from the original Morgan project. Jaisun’s self-titled set presented another quartet of Morgan songs. Among the goodies on Jaisun’s record is a Foster original, “Closet Man,” co-written with fellow Skylark member Donny Gerard and singer/songwriter Eric Mercury. It is a smooth, Latin-tinged ballad that’s a pleasure to listen to. Foster’s keys and synths are in the spotlight while Jaisun’s vocal performance is good and along the lines of Morgan’s original. Another Foster produced song on “Jaisun” was Jay Graydon’s funky number “I Fall In Love Everyday,” which was released as a single. 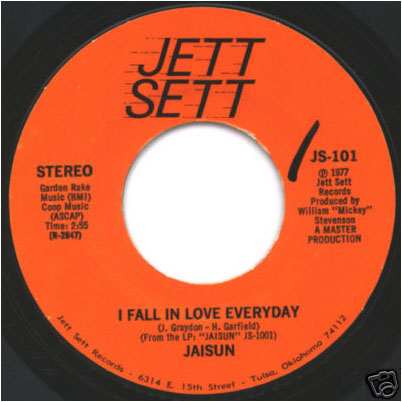 Your secret is safe inside me, closet man
Safe under lock and key, understand
What you’re thinkin’ is important
Isn’t really so, you see
But your secret’s absolutely safe with me

Your love is soft and nights turn into tears
Your tattoos and your muscles disappear
And the ring that once gave you
Now you’re wearin’ in your ear
But your secret’s absolutely safe, my dear

There’s nothing new at all under the sun
You’re not the only one
Why, it’s older than religion
And quite common among nuns
But you’re secret’s absolutely safe, little one

Closet man
Your secret’s safe, safe with me