Jimmy Thudpucker is a fictional character from the legendary comic strip, “Doonesbury.” Created by Pulitzer Prize winner Garry B. Trudeau in the early seventies, “Doonesbury” had amazing success and became a true editorial phenomenon. Jimmy Thudpucker was also the lead figure of a little seen animated TV special aired in 1977. In the program Thudpucker was a famous singer/songwriter who was seen as some kind of cross between John Denver and Bob Dylan.

The soundtrack from the animated special was released with the title “Jimmy Thudpucker’s Greatest Hits.” That album was produced by former Booker T & the MG’s member Steve Cropper with the participation of the Walden West Rhythm Section that included session greats Jay Graydon and David Foster. The singer behind the Thudpucker character was Jimmy Brewer, a session man who also co-wrote a good portion of the songs. All the lyrics were written by Garry B. Trudeau while Foster had a strong hand in the arrangements and co-wrote three key numbers.
The musical mood of “Jimmy Thudpucker’s Greatest Hits” is a laid back, elegant pop with soul elements close to Foster’s projects of the era. There are several good tunes including “So Take Your Life,” co-written by Foster with Jimmy Brewer that’s similar to Airplay ballads. The single off the album was the breezy “Ginny’s Song” that was also released in an energetic disco version. Another winner is Foster’s big ballad, “So Long/Overture ‘73” that presents an adventurous orchestral break with Foster’s piano in the spotlight. Maybe the best song on “Jimmy Thudpucker’s Greatest Hits” is the pop/soul ditty, “I Don’t Know My Love.” Co-written by Foster and Trudeau with Cropper, it showcases Graydon providing some delicious guitar licks and Brewer delivering a smooth performance with his falsetto supported by Bill Champlin’s bluesy voice.

Through the years, Foster and Graydon grew a good friendship with Trudeau who included them in some of his comic strips. Later, Trudeau would dedicate some heartfelt lines to Foster on the super-producer’s 1986 Billboard special. 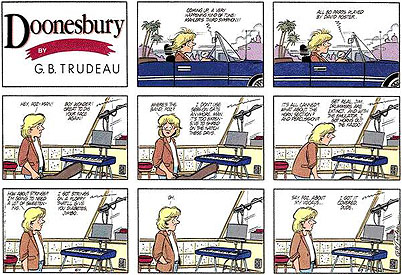