In 2002, Maurice White finally released a live album on his Kalimba label with the recordings of a great Earth, Wind & Fire concert performed in Rio de Janeiro, in 1980, before an audience of more than 100.000 people. Back then the band was at the top of its game both commercially and artistically. This exciting record entitled “Live in Rio” presents many of EWF’s most treasured songs performed by an incredible line-up of musicians with amazing intensity and craftsmanship. Legendary lead singers Maurice White and Philip Bailey dominate the show along with sax man Andrew Woolfolk, bassist extraordinaire Verdine White, keyboardist Larry Dunn, drummer Fred White, percussionist Ralph Johnson, guitarists Al McKay and Johnny Graham, plus the smokin’ Phoenix Horns. Evergreens like “Boogie Wonderland,” “September,” “Fantasy” and a sumptuous rendition of “After the Love Is Gone” are all included here. “In The Stone,” a Foster classic co-written with White and Allee Willis for the “I Am” album, also made the record. With its classic horns intro, catchy rhythm and exciting groove, this spectacular song has been used on countless radio and TV ads and jingles. “Live in Rio” also includes a snippet of the “I Am” original song “Rock That.” It is another Foster/White lively moment. We suggest you check this album out to once again experience the absolute greatness of Earth, Wind & Fire’s music. The band is still performing today minus Maurice White. However, they are still going strong with new musicians keeping the legacy alive and kicking. 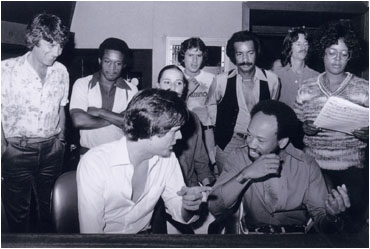 I found that love, provides the key
unlocks, the heart and souls, of you and me
Love will learn to sing your song,
Love is written in the stone

Every man, I meet is walking time
Free to wander past his conscious mind,
Love will come, and take you home
Love is written, in the stone
Do you believe, my friend, in what you claim?
People of the world all doubt the same
bringing questions of their own
truth is written in the stone

In the stone, you’ll find the meaning
you’re not standing tall (It’s in the stone)
In the stone the light is shining,
ever touching all–

Life experience a passing day
Time will witness, what the old folks say
getting stronger every day
Strength is written in the stone
Deep inside your heart for you to keep
lights a spark of light that never sleeps
The greatest love you’ve ever known
Yea, it’s written In the stone

In the stone, you’ll find the meaning
you’re not standing tall (It’s in the stone)
In the stone the light is shining,
ever touching all–