In the latter ’70s, David Foster and Jay Graydon made the transition from top session players to “up’n’coming” producers. They started writing and producing for many artists and often collaborated on each other’s projects. Those first works for people like Bill Champlin, Steve Kipner, Hall & Oates and Marc Jordan – though not very commercially successful – were the first gems of the quality pop that made them stars of the recording studios in the early ’80s.While developing this change, the Airplay guys kept their work as session players, but they had stronger input in the control booth as arrangers and songwriters. Scott English’s 1978 self-titled release was a good case in point. English was a veteran singer/songwriter from the U.K. who just had a monster hit co-writing Barry Manilow’s “Mandy” with Richard Kerr. Both Foster and Graydon played a big part in English’s album, playing on all the tracks plus arranging the material and co-writing a few songs with the singer. The sound of this record, though a bit dated, was a good mix of what was on the radio during that era. There were up-tempo pop songs that echoed a bit of Elton John’s stuff as well as disco-influenced moments. There was also the right amount of love ballads and even some light rock a la Peter Frampton. Graydon’s standout guitar work was a plus here while Foster (along with Robbie Buchanan) provided the classy background of layered keyboards and synths. The weakest link was English’s voice that lacked personality and power, but was supported by good singers like Carl Graves, Eugene McDaniels and Kipner.

The best cuts on “Scott English” were the opener, “I’m Just A Little Bit Crazy,” a good pop/rock song embellished by Graydon’s ultra-fine guitar work, and the light, funky “People To People,” which sported a nice arrangement and very good horns. Another song of note was “Yesterday’s Gone,” co-written by English with Foster. It’s a piano-driven ballad that has all the orchestral elements of Foster’s ’80s hits. Foster and English co-wrote another song on the record, “Sad Eyes,” a nice pop/disco ditty. 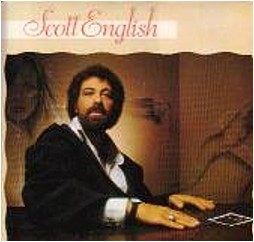