From THE DREAM WEAVER
Written by Gary Wright

There is an interesting tale about how “Dream Weaver” was included at the last minute on Gary Wright’s album of the same name. A ballot was created with another composition, “Empty Inside,” and it was David Foster’s decisive vote that included it on the album. If that’s the truth, Wright should thank Foster’s ear because “Dream Weaver,” a profound song about spiritual matters, became a Billboard #2 smash at the beginning of 1976. It was the first success in a string of hits for the musician. Its parent album went on to sell over two million copies in the US alone and spawned another big hit, the danceable “Love Is Alive.”

Wright was a founding member of the famous UK band Spooky Tooth as well as a keyboard player for George Harrison. The friendship with Harrison put him in touch with David Foster. Foster was just starting his career as a session player and “The Dream Weaver” was one of the first big hits he played on. “The Dream Weaver” was a musically innovative album, almost revolutionary, all based on keyboards. Every song is performed with synthesizers, piano and electric piano. Quite a formative experience for the young Foster, this is how he remembers it:

“It was Gary`s concept for sure, but basically that whole album was him, me, and a drummer. During the session, Gary took me over to this machine and said, “Press a note.” It was an ARP String Ensemble. I just couldn`t believe what I was hearing. That was my introduction to the new brand of synthesizers… so we did that whole Dream Weaver album, and it was a huge success. I guess a lot of people would have to credit Gary with being one of the first to do an all-synth album. We had a little Roland drum machine on every tune, plus a real drummer. That great Moog bass was on every cut, plus a Rhodes, an ARP String Ensemble, and a couple of other goodies.”

After the success of “Dream Weaver,” Foster appeared on Wright’s follow-up, “Light Of Smiles” and played on the single “Phantom Writer.” 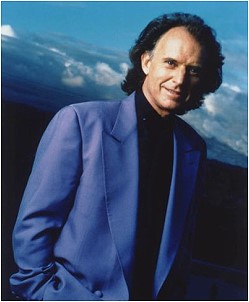