From LIFE IS GOOD IN MY NEIGHBORHOOD
Written by David Foster, Robert Lamm & Tom Keane

Back in the second half of the sixties, Robert Lamm along with Walter Parazaider, Terry Kath, Danny Seraphine, Lee Loughnane, James Pankow, and Peter Cetera formed a band that came to be known as Chicago. He was the primary writer and singer of their early giant hits like “Does Anybody Really Know What Time It Is,” “Saturday In The Park” and “25 or 6 To 4.” Through the years, Lamm has released a handful of solid solo albums from his 1974 debut “Skinny Boy” up to his 2003 outstanding solo effort, “Subtlety And Passion.” He was called the social conscience of Chicago and has undoubtedly been fundamental in the shaping of their rock-jazz sound. “When Will The World Be Like Lovers” is an elegant composition that Lamm penned with David Foster and Tom Keane during the Foster produced sessions of “Chicago 18.” Although recorded by the band for that record, it unfortunately didn’t make the final cut. Thankfully, Lamm recorded his own take of “When Will The World Be Like Lovers” for his 1995 solo “Life Is Good In My Neighborhood.” This version compared to Chicago’s lacks the trademark Chicago horns and the vocal interplay of Lamm with Bill Champlin and Jason Scheff. Nonetheless, it still echoes of Foster’s greatness in the refined, up-tempo arrangement and the jazzy atmosphere. A sample of another legendary composition by Robert Lamm, “Beginnings,” is used toward the end of the song to spice things up even more. Legendary music maker Phil Ramone produced “Life Is Good In My Neighborhood.” Among the guest players were important names like singer/songwriter Randy Goodrum, Bootsy Collins on bass plus guitar greats Mike Landau and former Chicago axe-man Dawayne Bailey. 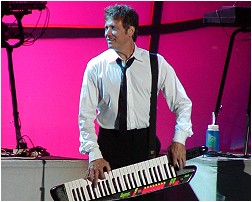 We’ve been living in the problem, it’s so clear
Spreading wreckage and confusion
Names and places flash like neon in the air
That’s how it goes, ‘til someone says

When will the world be like lovers
In a dance, spinning round and round
When will we know what was lost has been found
Maybe it starts with us now

We’ve been doggin’ it and drifting for so long
Putting off our evolution
And it’s possible we’ll never get it on
That’s how it goes, ‘til someone says

Heart, where we want it to be
Love, like it’s a miracle
Power, to be like we need to be