The Brothers Johnson’s 1978 platinum release, “Blam,” witnessed the first collaboration between Quincy Jones and David Foster. The veteran super-producer called Foster to co-write, play and arrange for the album. Jones was the master of the sophisticated funk/soul school. The string of successful records that he produced for The Brothers Johnson are true gems of that music genre. “Blam” is energized and mellow at the same time, highly sophisticated yet raw, showcasing the superior playing of George and Louis Johnson on guitar and bass respectively. This # 1 “Black” album includes dance hits like the strong opener “Ain’t We Funkin’ Now.” Other super-funky episodes include “Ride-O-Rocket” and the powerful title track co-written by Foster, Jones, the Johnson brothers, Alex Weir and Tom Bahler. “Blam” also offers a couple of smooth ballads. “It’s You Girl” echoes the Doobie Brother’s slicker moments with great vocal harmonies and tight playing. “So Won’t You Stay” was co-written by Foster with drummer Harvey Mason. It is a stunning, slow jam superbly sung by George Johnson while surrounded by Foster’s trademark set of synthesizers and ultra-smooth fender rhodes. Let’s not forget the presence on this song of guitar legend Larry Carlton and the great Michael Brecker playing a warm tenor sax solo. 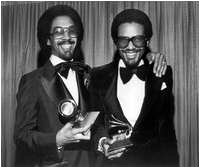 Two together, love forever
That’s how it should be

One so lonely, two’s the only way to be
Won’t you stay with me
Fulfill my fantasy