From AT THE THIRD STROKE
Written by Russ Ballard

Russ Ballard is a veteran singer/songwriter/guitarist who started out as the lead vocalist for the group Argent in the early seventies. He later embarked on a solo career that brought him much more success as a songwriter/producer for other artists while his own releases went almost unnoticed. One exception was his hit album, “Voices,” in 1984. Among his most famous songs were “Liar,” a top ten hit by Three Dog Night in 1972, “So You Win Again,” which reached the Top 40 with Hot Chocolate in 1977, “You Can Do Magic” and “I Know There’s Something Going On,” both worldwide successes in the early eighties for America and Abba’s Frida respectively. In 1978 Ballard recorded a new album, “At The Third Stroke,” in California with producer Keith Olsen of Fleetwood Mac fame. Listening to the nine original tracks included on the album, it is easy to hear strong flavors of Boz Scaggs, The Doobie Brothers or Fleetwood Mac. Though incorporated into Ballard’s own pop/rock style, these influences are enhanced by the appearance of David Foster, David Paich, Jeff Porcaro, Tom Scott and other of the best L.A. studio cats of the day. Those players had the ability to turn everything they played on into something classy and extremely pleasant musically. The collection has its best moments in the soft, rarefied “Helpless,” an up-tempo song that benefits from Foster’s touch on the fender rhodes, and the Paul McCartney-influenced “Treat Her Right,” a lovely acoustic ballad.
Another elegant episode is the jazzy “What Does It Take,” which is closer to Scaggs’ style. It is no surprise that Paich appears on it playing the clavinet together with Foster’s rhodes and Scott’s unmistakable saxophone licks. On this song, and throughout the whole album, Ballard does a good job vocally while playing some very good guitar solos. 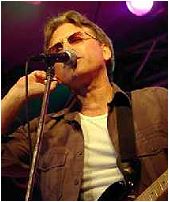