“Voices That Care” was a high profile charity event organized by David Foster in 1991 to support the American troops of Desert Storm. The song is a poignant anthem that quickly became a hit single and raised over one million dollars for the American Red Cross and the USO. Linda Thompson wrote the touching lyrics and David Foster matched them with a melody he co-wrote with his friend, Peter Cetera, a few years back.
The recording brought together many music giants including Michael Bolton, Luther Vandross, Celine Dion, Garth Brooks, Cetera, The Pointer Sisters, Little Richard, Bobby Brown and several others plus the instrumental artistry of Kenny G and Mark Knopfler of Dire Straits’ fame. Foster and Thompson also enlisted a who’s who of Hollywood superstars to sing the chorus of “Voices That Care,” Richard Gere, Kevin Costner, Billy Crystal, Kurt Russell, Whoopi Goldberg and Meryl Streep. Other contributors were sport personalities like Marcus Allen, Michael Jordan and Wayne Gretzky.
The music quality of this ballad, fuelled with the star-studded sessions, propelled it to sell over 500,000 copies in the U.S. and achieve gold status. It also reached # 11 on Billboard’s Hot 100. A video single of the event was also released and became a platinum seller. The single also included an instrumental version of the song and its original demo recording performed by the unforgettable Warren Wiebe. 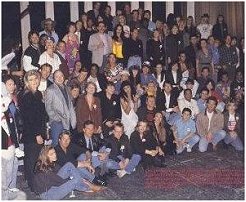 There, you had to take a stand
In someone else’s land
Life can be so strange

But I won’t turn my back again
Your honour I’ll defend
So hurry home, and ’til then (til then)

Chorus:
Stand tall, stand proud!
Voices that care are crying out loud
And when you close your eyes tonight
Feel in your heart how our love burns bright (hurry home… ooh)

Right or wrong, we’re all praying you remain strong
That’s why we’re all here and singing along