The Bottom Line was a special disco project that producer Jack Conrad started at the end of 1973. He took a duo of very talented, up and coming musicians like David Foster and Jay Graydon and together with them he wrote and recorded a bunch of dance tracks. This is one of the first records that has the future Airplay guys working together. The result while not being a masterpiece is very pleasant nonetheless. The main appeal of this collection is the ultra fine playing of Foster and Graydon that truly spices up the material. “Crazy Dancin’” was first released in Europe in 1974 and sometimes later it finally saw the light of day in the USA. The first single, “That’s The Way To Go,” co-written by Foster and Graydon with Conrad, was the first 12 inch single ever to be released in the USA. The Bottom Line received also a nomination by Billboard as Best Disco Album and Best New Disco Artist. At the time of its release on compact disc, Conrad included a few tracks that were part of another unreleased album entitled “Makin’ Tracks.” A couple of these songs are Foster’s goodies, one is the disco/pop number “Take A Chance” while the other is a great funky song entitled “I Just Want To Love You.” This track is dominated by the jazzy licks of Foster’s piano and some very prominent trumpet lines courtesy of Chuck Findley who arranged the horn section on these records. Right after “Crazy Dancin’,” the same team of musicians recorded another project entitled “Pegasus,” always along the same disco lines and that is now available on compact disc as well. 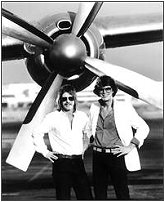