Singer/songwriter Carole King has an amazing track record with plenty of hits during her long and successful career. “Tapestry,” released in 1971, is her masterpiece and an absolute listening delight from start to finish. It is a flawless recording filled with gorgeous songs that have been covered dozens of times like “It’s Too Late,” “So Far Away,” “You’ve Got A Friend,” “(You Make Me Feel Like) A Natural Woman,” and “I Feel The Earth Move.” Although King has released several other albums, she has never achieved the same incredible artistic results. In 2001 she released “Love Makes The World,” her first collection of new material in eight years. That record marked her first collaboration with Humberto Gatica, who masterly oversaw the whole project. David Foster appeared as co-producer and co-writer of “It Could Have Been Anyone.” Written by Foster, King, and another very talented tunesmith, Carole Bayer Sager, it is a love ballad with tender lyrics and a pretty melody. Foster’s arrangement effectively mixed his trademark sounds with King’s timeless songwriting. Her voice is as lovely as ever and the vocal arrangement is really soothing.
“Love Makes The World” is quite good and there are several other moments on this cd worth a listen, including the up-tempo title track. Céliné Dion covered “The Reason” on her “Let’s Talk About Love” cd and she also appeared on this version. Be sure to take a listen to “I Wasn’t Gonna Fall In Love,” a sweet jazzy jam with special guest and trumpeter extraordinaire Wynton Marsalis. Superstars Babyface and k.d. lang also share their talents on this offering from King. 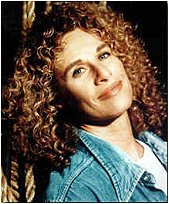