“They sing as magnificently now as I remember them 30 years ago. They haven’t lost any range. You know, the voice is a muscle and, like everything, we all get a little older, lose your range, whatever. I see no difference in the way they sing now than when I was a fan like everyone else. Next to The Beatles, they were probably the most creative group ever.” So said David Foster after producing “I Could Not Love You More” for the Bee Gees’ “Still Waters” album. The Gibb brothers approached Foster after they fell in love with a Foster produced song. Here’s how Robin Gibb remembers it: “I was listening to a song on the radio that made us wanna work with David Foster, “I Swear” by All 4 One. I was in London, in Marble Arch, when I heard it, and I said, ‘That’s a great vocal talent. Whoever’s doing that, we’re gonna have them produce a song on our album.’ And it was David Foster. Brilliant guy. He was one of the first we approached for the album.” The song is a sweet ballad that slowly rises with Barry Gibb’s breathy vocals and moves to their famous harmonies gently accompanied by Foster’s keys and synths. After the first chorus the song develops in the more typical Foster ballad style of the nineties with synth strings, acoustic and electric guitars, plus effective breaks to complement the Bee Gees’ dreamy voices. The song reached the top 15 on the UK charts in 1997.
Another Foster production on this album, “I Surrender,” is an up-tempo pop song enriched by their legendary vocal harmonies. “Still Waters” reached platinum status in the USA. It was a multi-produced affair and some of the big music makers involved were Hugh Padgham, Russ Titelman and their old mentor, Arif Mardin. Another standout track is the R&B flavored “With My Eyes Closed,” produced by Tony, Toni Tone’s Raphael Saadiq. 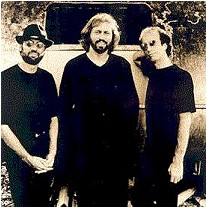 Here you are, owner of my heart
Just the way that love should be
And there is something I must say to you
If you promise to believe
That it’s you I’m living for
And, I could not love you more

Seasons may come and seasons go
But these are the truest words I know
Face to face, eye to eye
This is the summer of our lives
One love that cannot die

Here you are, owner of my soul
Never let you say goodbye
And there is something I must say to you
We leave the world outside
And you have come to me at last, we start
Open your heart
Let my deepest love inside
I’m only doing what I have to do
If you promise to believe
That it’s you I’m living for
And, I could not love you (more)