From HERE’S THE WORLD FOR YA
Written by David Foster, Bob Rock, Paul Hyde & Miriam Nelson

“The Payola$” started out as a punk/new wave band in British Columbia around the end of the seventies. In just a few years they developed a personal pop/rock style that gave them a few hits on the Canadian charts.The group was the brainchild of guitarist Bob Rock and UK singer Paul Hyde. In 1985, after a couple of so-so albums, they became “Paul Hyde & The Payolas” and their label put them into David Foster’s capable hands for a new record. Foster, a fellow British Columbian, was the hottest producer around at that time with his recent hits for Chicago that sent him to the Grammy podium as Producer Of The Year. “Here’s The World For Ya” was the result of the collaboration and it is a solid pop/rock collection. Foster’s influence is clear in the multi-layered vocals, the clean overall sound, the arrangements and keyboard playing. Hyde called the record: “easily the best thing we’ve ever done.”
The producer co-wrote three songs on the album. “It Won’t Be You” is an especially good rock song deeply influenced by Bryan Adams who co-wrote the tune with Jim Vallance, Foster, Hyde, and Rock. The title track is an intense power ballad with great vocals by Hyde plus beautiful work on the keyboards by Foster. The other tune that Foster co-wrote, “You’re The Only Love,” is a radio-friendly, superbly crafted love ballad. The song showcases Hyde’s vocals and Foster’s keys, but it also benefits from Bob Rock’s amazing performance on the acoustic and electric guitars. The song reached # 37 on Billboard’s Mainstream Rock Chart and was a minor entry on the Billboard Hot 100 at # 84. The album was a good success in Canada with other significant hit singles like the title track and “Stuck In The Rain.”
After the band’s break-up, Hyde worked as a solo artist. Bob Rock went on to become one of hard rock’s most successful engineers/producers working with, among others, Motley Crue, Bon Jovi, Aerosmith and Metallica. 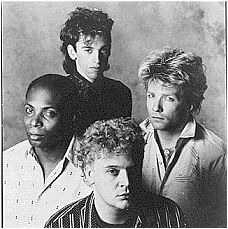 Keep you safe for me
I will be your only lover
Everything’s alright
Girl there will never be another
My love was like a garden turning into stone
All the flowers were gone, the weeds were overgrown
And there’s one thing I want you to know
I’ve finally found what I’m after
Now my face is filled with laughter