From TWO OF A KIND
Written by David Foster, Steve Lukather & Olivia Newton-John

David Foster has always been very successful with songs that he wrote and/or produced for motion pictures. A few, good examples are “St. Elmo’s Fire (Man In Motion)”, “The Glory Of Love” and “I Will Always Love You”, all # 1 records and timeless songs. In 1983 Foster was asked to produce the soundtrack for the movie, “Two Of A Kind”, a reunion flick for John Travolta and Olivia Newton-John that wanted to re-capture again the magic of “Grease”. Foster focused mainly on Newton-John’s voice so half the record is only Olivia while the rest are good performances by Chicago, Journey, Patti Austin and Steve Kipner with Foster himself appearing with his “Night Music”, an instrumental off his “The Best Of Me” album.

“Twist Of Fate” was the big hit on this soundtrack, co-written by Kipner, an old friend and frequent collaborator of Foster who is still making hit records today (“Genie In A Bottle” for Christina Aguilera) and has written gems like “Hard Habit To Break” for Chicago. “Twist Of Fate” isn’t so typically Foster if not for the use of keyboards, it’s a bit more upbeat, like the second single (and other chart entry) “(Livin’ In) Desperate Times”. Olivia Newton-John sings both songs with the right intensity even though we think both her and Foster give their absolute best in the other two songs on the collection, both Foster originals that she delivers with real class. First is “Shaking You”, a tender, vocal version of another of the sweet songs on Foster’s “The Best Of Me”. The second tune, always a ballad, is entitled, “Take A Chance” and it is a duet with Travolta, that isn’t a singer but does a decent job with this sweet melody that has Foster’s print all over it. The Canadian genius co-wrote this song with Olivia and Toto’s Steve Lukather who also plays the effective guitar solo. It remains to be said that there’s another incredible song on this soundtrack, it is entitled “The Perfect One” and Foster co-wrote it with Boz Scaggs who sings it and it’s another example of pure “Foster” magic. 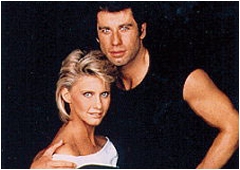 Could it be we’re the perfect pair?
Have it all if we’d only dare
I have dreamed of a night like this
Maybe you will end my loneliness

Meeting you was a dangerous thing
Can’t control what is happening
Stood my ground, didn’t run away
Trying hard to hide that I’m so afraid

Guess my heart’s on the borderline
Couldn’t stand it not to work this time
It’s hard to fight when it feels so good
If there’s something, don’t you think that we should