From OUTSIDE INSIDE
Written by David Foster, Steve Lukather & Fee Waybill

Here’s another good answer to all those people who always talk about David Foster as a writer of “syrupy love songs”. He is, without any doubt, the master of pop ballads but his incredible talent has brought him often in other territories like jazz/fusion, r&b and pure rock. The Tubes’ “She’s A Beauty”, out of their “Outside Inside” album, is a great rock song with lot of hard guitar work courtesy of Steve Lukather (of Toto fame), and powerful vocals by Fee Waybill with the help of Toto’s Bobby Kimball and Chicago’s Bill Champlin.

This tune reached Billboard’s top ten in 1983 and surely is the biggest hit of Tubes’ career. Foster worked with them on another record, “The Completion Backward Principle” in 1981, and he also produced in 1984 the debut album of their lead singer, Fee Waybill, entitled “Read My Lips”. These records are all great example of Foster’s production art and especially interesting cause they show him in a different musical environment and always with highly successful results. 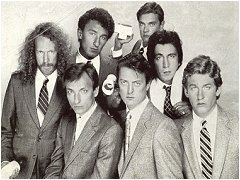 You can say anything you like
But you can’t touch the merchandise
She’ll give you every pennies worth
But it will cost you a dollar first.
You can step outside your little world
You can talk to a pretty girl
She’s everything you dream about